Reliability on the Red Sea

Kalmar equipment - delivered and supported by local dealer Alkhorayef Commercial – is boosting productivity at the largest terminal on one of the world’s key shipping routes.

RSGT is a partnership between Red Sea Gateway Terminal of Saudi Arabia and the Malaysian Mining Company. The combined assets, handling capacity and experience of these partners place the terminal operations among the ten largest container terminal operators globally, with a combined annual handling capacity of 20 million TEU and equity-weighted throughput of more than 10 million TEU.

Covering an area of 1.5 million square metres and with an annual container throughput capacity of 5.2 million TEU, RSGT is serviced by the world’s largest state-of-the-art cranes and most advanced terminal equipment.

RSGT uses a variety of Kalmar equipment supplied by Alkhorayef Commercial, which has been a Kalmar dealer since 2016 and is part of the Alkhorayef Group with operations in more than 40 countries.

“The combination of a global brand and a strong local dealer enables us to deliver on our promises to customers."

“The decision to purchase Kalmar equipment was based on final technical and commercial evaluation, which led to a strong recommendation from our team,” explains Hamdi Nadhrah, deputy chief executive officer at Red Sea Gateway Terminal. “Kalmar reachstackers, empty container handlers and forklifts are used across our yard side operation and they have proved to be extremely reliable.”

Since the foundation of Alkhorayef Commercial in 1957, it has built partnerships with the biggest companies in Saudi Arabia, including RSGT.

Ezzat Salem is a sales manager for the Jeddah branch of Alkhorayef Commercial. Material handling is one of the activities of the company’s industrial division, supplying Kalmar equipment to ports and logistics operators.

“The technical superiority and performance of Kalmar equipment and our strong reputation for after-sales service and support have been very important factors in enabling the customer to upgrade its capabilities to provide world class service and continuously improve its performance,” he says.

Teamwork is the key

RSGT has internal resources for servicing equipment, but Alkhorayef Commercial provides support for urgent requirements such as breakdowns as well as spare parts. “The customer wants to minimise the downtime of its equipment to maximise productivity, and this is possible only when the equipment dealer has a presence in the region,” adds Salem.

He describes his company’s partnership with Kalmar as extremely positive. “The combination of a global brand and a strong local dealer enables us to deliver on our promises to customers,” says Salem. “Teamwork between our organisations has already proved successful and I am confident we will generate more business in the future.” 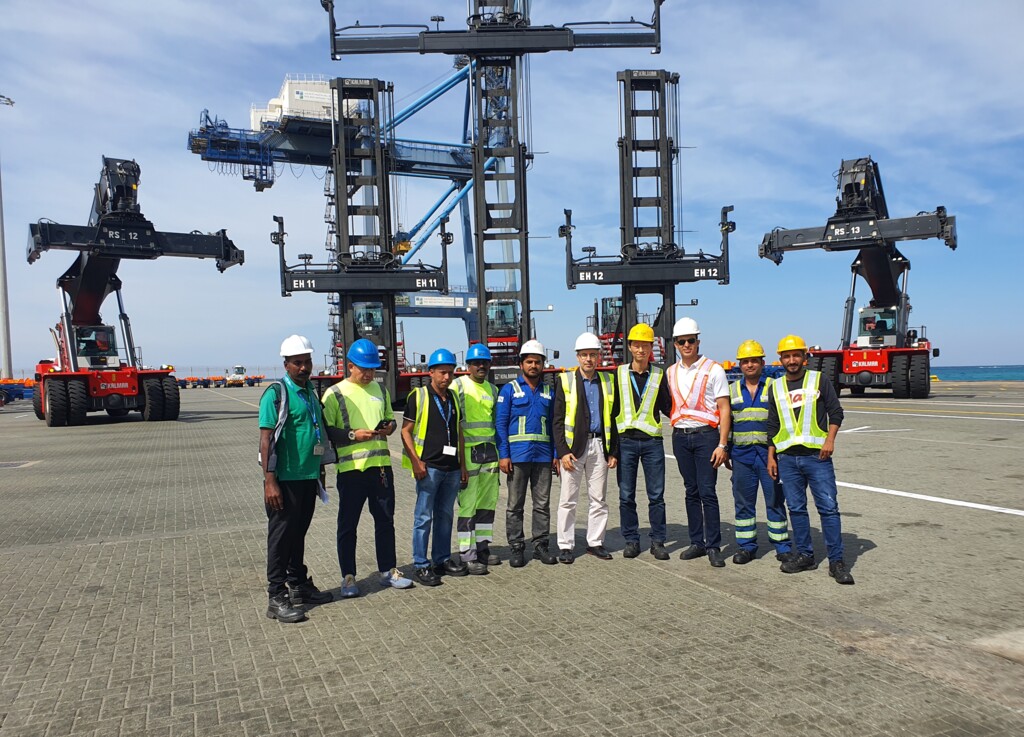 Themes in this article

At Kalmar risk and accident prevention start from the very first contact with the client to create a solid business plan for sustainability.
Collaboration People Safety

New remote service concepts are giving terminal operators the possibility of drawing upon system providers' experience and expertise wherever they are in the world. Through remote connectivity and automatic continuous monitoring, experts can help identify, anticipate and fix issues with automation systems or equipment, thus minimising downtime while maximising availability and performance.
Automation Collaboration Services Technology

Kalmar Expert Roundtable (Part 3): How to evaluate the cost-saving potential of eco-efficiency investments

In this final part of the Kalmar's LinkedIn Live roundtable discussion, Timo Alho, Jason Gasparik, Christopher Saavedra and host Pilvi T&auml;htinen-Sfakiotakis go over the practical steps that terminal operators can take when evaluating various equipment options and beginning their eco-efficient journey.&nbsp; Read part 1 and part 2 of the discussion. As you pointed out in this discussion, investments in eco-efficient solutions are complex projects that must not only address stakeholder requirements, but also present a compelling business case for the terminal. How can terminal operators evaluate the cost-saving potential of these investments? What needs to be taken into account when comparing different equipment options?&nbsp;
Collaboration Eco efficiency People Technology